The decision whether or not (or when) to upgrade is complex and dependent on many factors. Upgrading operating systems can create a competitive advantage, increase productivity and reduce administrative overhead. Alternatively, upgrading can cause compatibility issues with core applications, reduce productivity and significantly impact budgets and the bottom line. Due to mixed reviews of Vista, many businesses have chosen to delay upgrading to the controversial operating system and are waiting for Microsoft to either fix it or produce something better. The immediate positive reviews of the recently released Windows 7 beta are encouraging, but should you bet your business on it? 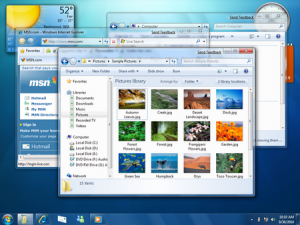 Windows 7 is looming on the horizon. It’s hard to believe, but Windows XP first arrived in 2001. XP is a good OS and a significant improvement over Windows 2000 in many business-relevant ways. This was especially evident with the release of service pack 2 and its improved networking and security capabilities.

Businesses have been riding the XP train for eight years, despite Vista being available for some time now. Hesitation exists because upgrading can be a headache, and there’s the often-stated mindset that you should never opt for the first release of a Microsoft OS. Whatever the reason, many businesses wait until Microsoft has “worked the bugs out.” I‘ve often heard the belief that the best way to adopt new OS releases from Microsoft is to let someone else do its beta testing.

Like it or not, the XP train is reaching the end of the track. Support officially ended for XP in April 2009, with extended support until 2014. That means no more updates and no more free support from Microsoft for the duration. It also means you cannot buy a new PC installed with XP, and the legal ability to downgrade from Vista to XP will no longer be an option. So one way or another, decision makers are going to face a choice of operating systems that will not include XP.

It is not all bad news though.

I’ve been using Windows 7 both in beta and release candidate for several months on both my home PC and my corporate laptop. I use my laptop as both a desktop replacement at the office and as a mobile workstation for multiple client-site use.

1. Simpler and faster networking – Network browsing is fast and efficient, unlike Vista where long lags can occur when clicking on a network drive. Wireless configuration and reconnecting to existing networks is more streamlined and easier to achieve.

2. User account control – In Vista, UAC was unmanageable, whereas 7 is unobtrusive. I eventually ended up turning it off in Vista, which did nothing for security.

3. Faster boot times – In all but a few cases where a user was using a stripped-down version of XP on a fast computer, 7 still boots faster. Unlike XP, which seems to get slower over time, my laptop still boots as fast as it did the day I installed 7. I’ve experienced this on platforms ranging from an older Pentium M 1.6 and a more current Centrino Dual Core.

4. Faster and easier install – I’ve smoothly installed 7 on eight different devices. No muss, no fuss, no drama. My greatest fear of driver availability on my production laptop has been laid to rest. When Microsoft released Vista, it introduced new driver architecture primarily for the graphics and sound subsystems. The difficulty of finding drivers early in an OS release is legendary. With 7, I’ve only encountered a handful of devices, mostly older printers, for which I have failed or had to search to find drivers. Where 7 drivers were not available, typically Vista drivers worked. Only one device has failed to work properly – an older Tektronix Phaser printer. Windows 7 included drivers are extensive. What’s more impressive about the availability of drivers is that I installed the 64-bit version instead of the more common 32-bit.

5. Blue Screens – Lots of blues with Vista, not one in 7. Your results may vary, but consider I currently have three different VPN clients and a host of diagnostic applications on my machine that do interesting things to the IP stack of my laptop.

Points in Favor of Windows 7 for the Enterprise

Included apps (Paint, Notepad, Calculator) are greatly improved in both function and look and feel. Windows 7 is vastly better than Vista and has proven itself robust and usable for both home and business. If you have the opportunity thru purchasing new equipment or reloading an existing machine, pick up a copy of 7 when it hits the market (October 22, 2009) and give it a try.

If you’ve had a chance to work with Windows 7 beta..what are your thoughts?